On a Bold Path to Startup Success

How Fergus Chan (BBA in Professional Accountancy 2008), alumni of The Chinese University of Hong Kong (CUHK) Business School, achieved his dream as a successful startup entrepreneur in his early 30s, was beyond everyone’s imagination–but not his.

With a quiet sense of confidence and speaking with an acquired American accent, Fergus, recounts his journey to fame and what has been driving his determination to succeed all along.
Despite his young age, Fergus already knew what he wanted with a laser-sharp vision. Back in 2006, when he was interviewed by the media after he got a scholarship to study at Harvard Business School for a year, he said he wanted to become “an inspiring entrepreneur who could earn respect from subordinates and colleagues.” It took him only seven years to realise his dream and become a co-founder CEO of Epinomics, a life science data analytics startup based in Silicon Valley.

By that time, Fergus was already accustomed to media interviews. His first claim to fame was when he became a top scorer in the Hong Kong Certificate of Education Examination (HKCEE), with 7As in his pocket. What was fascinating was that his twin sister, Fiona, achieved the exact same score as he did. Fergus has attributed his early academic success to having his sister as his study buddy. From an early age, he started to appreciate working alongside a teammate who had the same value, passion and goals as he did. They would often encourage each other and egg each other on so they would not rest on their laurels.

After secondary school, Fergus decided to pursue an education in business administration, and he chose CUHK Business School to get closer to his ultimate goal of becoming an entrepreneur who would make an impact on people’s lives. He was admitted to the School’s Professional Accountancy (PACC) programme through the Early Admission Scheme and graduated in 2008. Fergus explained his choice of the accounting programme, “Accountancy is the language of business. It helps you understand how a business operates and how to run it well. The fundamental principles apply to both bigger companies and startups.”

The knowledge he gained while at CUHK came in handy when he came across an extraordinary opportunity to head a startup in a cutting-edge field, epigenomics, while he was pursuing his MBA degree at Stanford Graduate School of Business.

At Stanford, he crossed paths with Paul Giresi and two Stanford Professors, who invited him to co-found Epinomics, which aims at turning outstanding academic research in genomics into real-life applications so that patients of a wide range of diseases can get personalised medical treatments, therapies and drugs based on their genetic status.
Fergus always has a passion about making a social impact through working in different capacities that touch people’s lives. By the time he was studying at Stanford, he had already several years’ experience working as a management consultant for McKinsey, where he was put on a fast track as a distinctive consultant. Having worked in Greater China, Southeast Asia, Mongolia, Europe, the US and the Middle East, he was exposed to a wide array of cultures and industries, including healthcare and technology. In addition, he was encouraged to spend time on doing things that would make a social impact, so he became extremely interested in social enterprises. In fact, his exposure to the concept of social enterprises at CUHK planted a seed in him to pursue meaningful work rather than working only for money.

“Accountancy is the language of business. It helps you understand how a business operates and how to run it well. The fundamental principles apply to both bigger companies and startups.” — Fergus Chan

“As a management consultant,” he says, “McKinsey helps big companies become successful or continue to be successful. I also wanted to help build something from the early stage and make it impactful, that’s why building a startup was a natural step. Going back to business school and being surrounded by a lot of passionate people was a step for me to spend more time doing something with a social impact.”

During and after his MBA time at Stanford, Fergus spent time coaching different technology startups on the side, including coaching a Stanford-affiliated startup accelerator. Through such volunteer work, he crossed paths with two professors and Paul who are inventors of a technology that Fergus built a team and turned into an eventually commercialised epigenomic product. This product analyses people’s genomics functioning status and then provides the cloud data analytics software to allow personalised applications of drug and medical therapies.

The Speedy Way to Startup

What exactly are “genomics” and “epigenomics”–the two concepts that Fergus’ startup specialises in?

Genomics is a branch of science that looks at our DNA. “Once you’re born, it won’t change,” explains Fergus. “It’s a static way of viewing a person. Prescribing medicine to fit the person’s DNA is a static measure. What matters more is how genes are turned on and off. This is the field we are in–epigenomics, which means ‘on top of genetics.'”
In other words, he continues, genomics or DNA are like hardware, but epigenomics is like the software or operating system of our body. External factors in the environment, such as our food, toxins and our emotional traumas, can actually change our epigenomes.

“To build a startup, you need to have an appreciation for all the skills that are needed.” — Fergus Chan

“The technology developed in Stanford provides a way to take epigenomics data to a new level,” Fergus says. “It is the technology to read epigenomes and provide the platform to analyse the data. Then we use the data as an engine to make them into actionable insights, which can be applied to research, drug discoveries and clinical settings.”
Fergus is getting a kick out of the far-reaching impact his startup has been creating since the very beginning, when he helped turn research into product from the get go. How did he manage to convince seasoned venture capitalists to invest in his startup without any launched products?

The strategy Fergus used was to incorporate potential customers in the process from day 1. In this case, he got a number of biotech companies to adopt the technology while it was still in the “paper” stage. Such demand proved to potential investors that they were not dealing with a technology that was yet to become a product or a product trying to find a market. One of the several collaborations his company had formed later on includes the Parker Institute for Cancer Immunotherapy.

Part of the initial core team of Epionomics with diverse expertise in medicine, genomics, data science, product and computer science (Photo provided by Fergus Chan)
“Our interests and demands were well aligned with our customers, which helped to raise funding immediately,” says Fergus. “That accelerated everything. So we managed to build and launch the product in the first year of operation and started bringing in a revenue. Some people originally thought that we are a research company, but we are actually a full product company with a lot of customers’ demand. We showed execution and delivered results.”

What Fergus’ startup managed to achieve is a bit of an anomaly even in Silicon Valley, where it typically takes a number of years for a concept in biotech to develop fully into a commercially viable product. The key to his quick start in raising funds before a product was launched boiled down to his iron-clad focus on what really matters, his “impatience” to see impact from his business, and his ability to minimise risks for potential investors.

“In Silicon Valley, we talk a lot about ‘de-risking.’ There are many risks–technology risks, product-market risks, etc. that you have to get through in order to build a company with value. For us, because we had demand from customers who were willing to use our product from day 1, that greatly reduced our risks.”

“My role as a CEO is to create a strong vision so that everyone knows where we need to head to, and then build a platform for them to leverage their expertise.” — Fergus Chan

Being a young CEO, what does it take for Fergus to run a company that consists of a diverse range of experts, including scientists, doctors, data scientists and computer engineers?
Understanding fully that one cannot possibly know everything necessary to operate a business, Fergus tries to focus on the big picture instead of micromanaging. “To build a startup, you need to have an appreciation for all the skills that are needed,” he says. “My role as a CEO is to create a strong vision so that everyone knows where we need to head to, and then build a platform for them to leverage their expertise. They would know much more than me about things they have expertise in. I also care a lot about supporting personal development, so I keep encouraging them to stretch themselves so they can grow into bigger and broader roles as well.”

Recently, Epinomics has been successfully acquired by 10x Genomics, a biotech company that specialises in single-cell and other emerging areas of genomic analysis with the goal of accelerating understanding of new biology and disease, which has recently won the San Francisco Bay Area’s fastest growing private company award. One of the reasons for the acquisition was to leverage Epinomics’ proprietary epigenetic technology and make it available to more scientists to enable better scientific discoveries and clinical applications. After the acquisition, Fergus’ goal is to make the company’s existing technology more available to researchers, clinical scientists and the society at large.

With his high-profile and intensive experience in business consultancy and entrepreneurship, Fergus has accumulated much wisdom to share with the aspiring entrepreneurs who are still in business school.

One common question among students is whether undergraduates should accumulate a certain number of years of work experience before starting their own business.
Fergus shares, “I think everyone has a different path, so there isn’t a right way for everyone. But one thing I care a lot about is that people should find out what matters most to them and then build a good team around it. Some people just start a company without understanding what they care about. But some people know what their life calling is, and they build a good team around that.”

“People should find out what matters most to them and then build a good team around it.” — Fergus Chan

Fergus believes that those who know what their calling is before building a business have the highest chance for success.

He sums up his advice for students in three simple steps:

Fergus in Past Media Coverage: 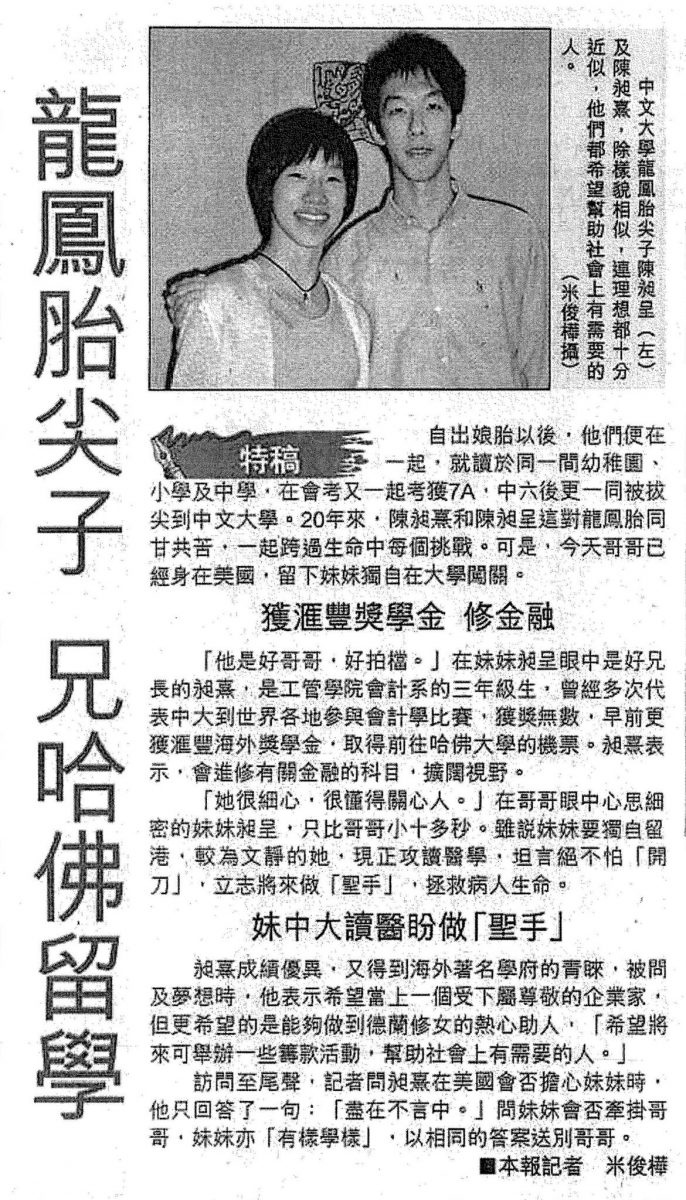 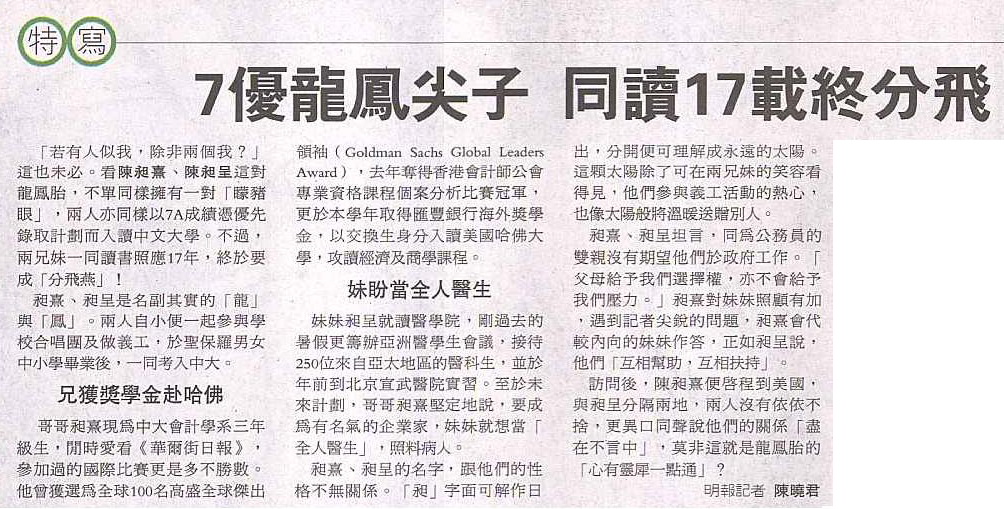 A Graduate’s Giving Back

Or
If you’ve linked your account to one of the following social networks, please click on the relevant icon to log in
Not a member yet?
Register
Cookies help us deliver our services. By using our services, you agree to our use of cookies. Learn more. And our site is best viewed with Google Chrome. Download here.