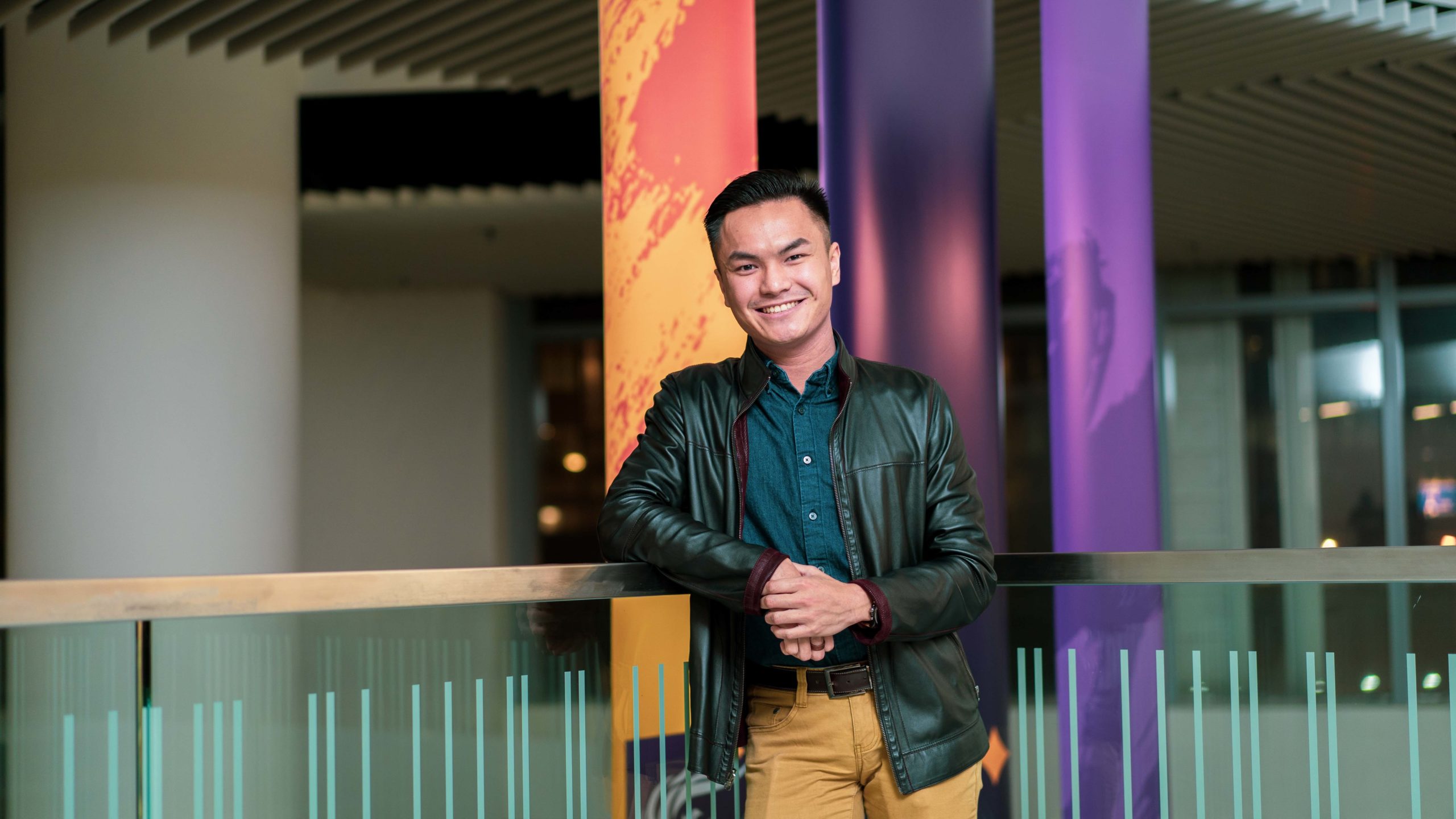 In this ever-changing world, being flexible trumps being well-planned.

Shern Koe (MiM 2019) is Malaysian Chinese. After finishing his bachelor’s degree in accounting, he joined KPMG as an auditor. Just as his career was about to take off as planned, he made a U-turn: He gave up a job that many people could only dream of and came to Hong Kong to enrol in the inaugural full-time MiM programme at CUHK. This risky move paid off when Hang Seng Bank made him a pre-graduation offer last year. He was selected for the Management Trainee programme, which allows him to explore a new career. He attributes this to his philosophy in life: Don’t waste time on what you don’t enjoy. 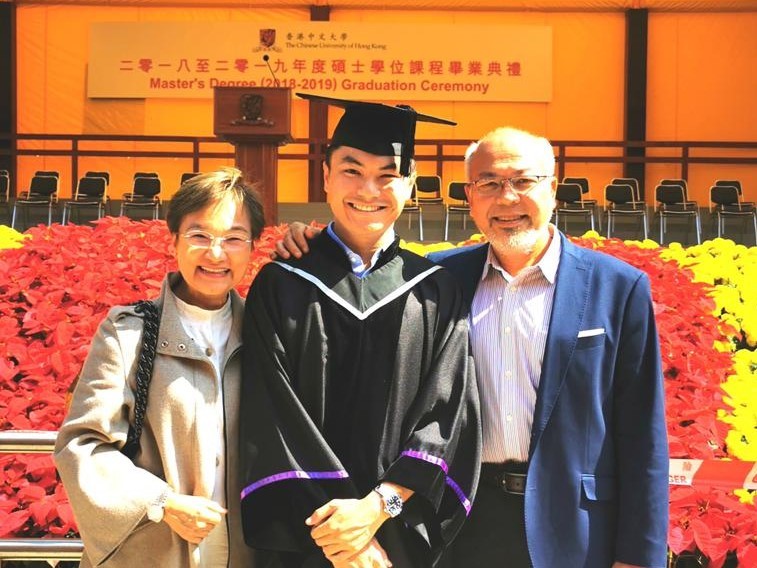 Shern (centre) becomes one of the first full-time CUHK MiM graduates last year. He poses with his parents at his graduation in joy.

An Aspiration to Create Value and Solve Problems

Shern is fourth-generation Malaysian Chinese, and his ancestry can be traced back to Guangxi. His father was also accountant, who planted the “accounting equals job security” idea in him. He went along with his father’s wish to study accounting in university. After receiving his bachelor’s degree in 2016, he studied hard for his ACCA professional accreditation and simultaneously applied for jobs at “Big Four” accounting firms. It did not take long for him to land an offer from KPMG. 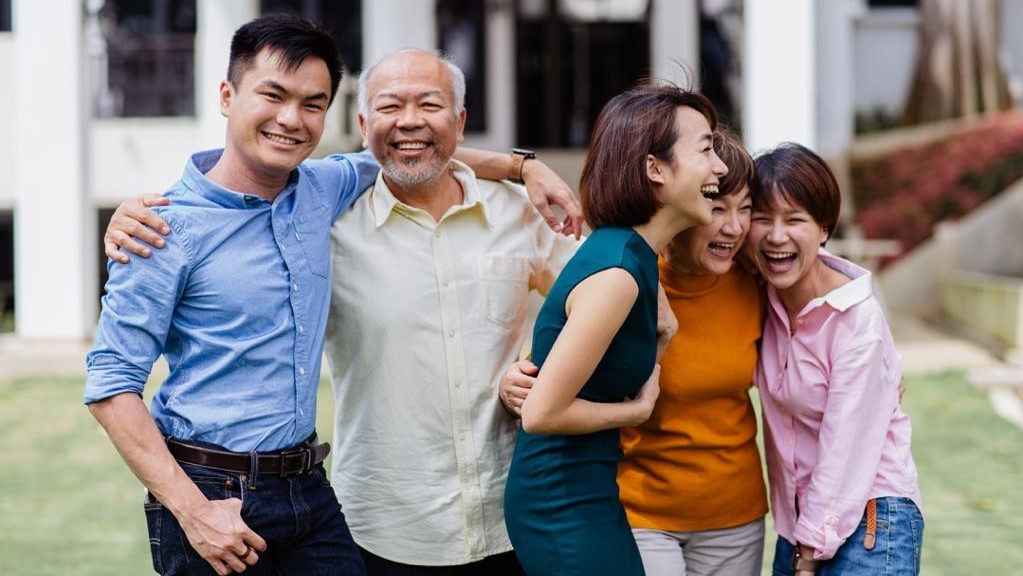 Shern (1st from left) is a fourth generation Malaysian-Chinese with ancestry that can be traced to Guangxi. His family is very close-knit. He particularly values guidance from his father on work and life.

Just as everyone thought he had achieved everything he wanted, Shern realised the reality of his job fell short of his expectations. “As an auditor I was always in the office verifying numbers and then checking off boxes on a form. It was quite dull. Also, clients only came to auditors to meet legal requirements rather than asking for actual help. That wasn’t something I enjoyed.”

Shern did some soul searching and had an epiphany thanks to a good friend. “I’d been friends with a senior whom I met from a charity summer camp for many years. She has noticed something special about me: I liked to think outside the box when it came to problem solving. I took pleasure in achieving success. I then had this revelation: Wouldn’t it be more fulfilling if I could help others solve problems and create value?” Although Shern knew staying at KPMG would have more guarantee of a bright future, he decided that he wanted more than a stable job, so he quit after four months at the job and never looked back.

Study in Hong Kong to Prepare for His Dream

It was no easy decision, and it took a lot of persuasion to convince Shern’s parents he did the right thing. Shern was certain that he must let go of his old life to welcome the new. “As long as I’m willing to let go of the past, something better will come along.” He saw the promotion of CUHK’s MiM programme by chance and was drawn to the unconventional curriculum. Courses such as Fintech Analytics and Corporate Governance & Corporate Social Responsibility were very innovative. “The programme was in line with my new career aspirations: to create value and solve problems in the business world.” This goal led him to Hong Kong in 2018.

The one-year MiM programme benefited Shern tremendously. “For instance, Business Analytics & Digital Innovation taught us how to collect and retrieve data for scenario analysis. It was perfect for the data driven development trend in business. I also learnt from another course Corporate Governance & Corporate Social Responsibility to assess the performance of a corporation from environmental, social responsibility and corporate governance perspectives. As the Hang Seng Index plans to incorporate a related index this year, you can see how forward-thinking the MiM programme is. It equips students with what they need before entering the workforce.” 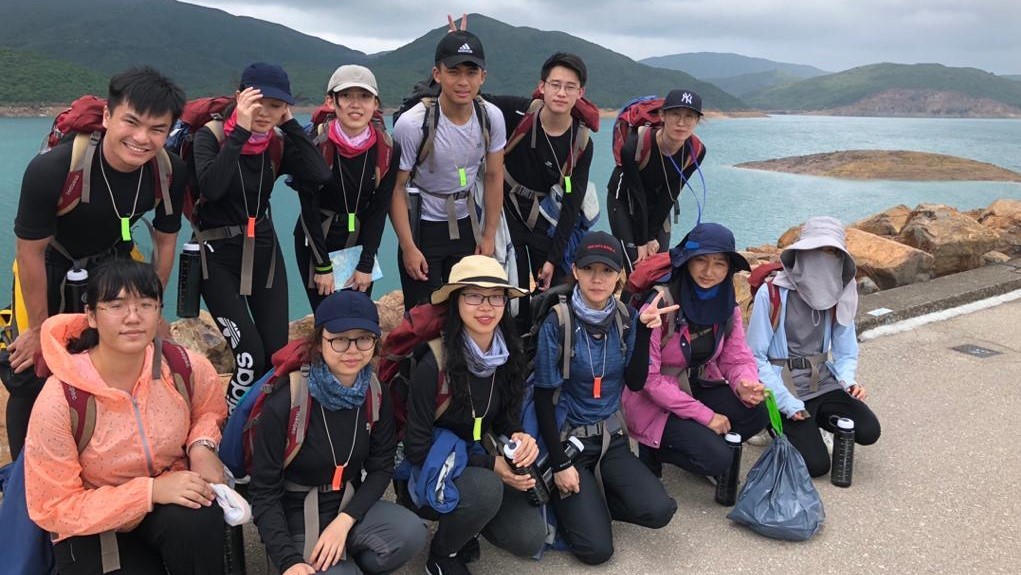 Before the MiM programme kicks off, Shern (back row, 1st from left) and his classmates take part in various pre-programme activities for a full month, including a three-day outward bound camp in Sai Kung for team building and adaptability training.

In addition to this, Shern is grateful to MiM Programme Co-director Dr. John Lai for taking students to lectures organised by different organisations such as the Hong Kong Monetary Authority and McDonald’s. It opens their eyes, giving them a chance to build their professional network and develop their people skills.

Language Proficiency Becomes an Edge in New Chapter of Career

Shern was hired by Hang Seng Bank before he graduated from the MiM programme. Surprisingly it was all unplanned. “A good friend of mine asked me to accompany him to a pitch competition at a recruitment event at Science Park. Contestants were asked to give a pitch of themselves in 60 seconds on stage. Corporate representatives in the audience could put up their signs if they were interested in a contestant. It was all done live and very exciting.” Shern remembers how nerve-wracking it was. Fortunately, about eight to nine companies showed interest in him – one of which was Hang Seng Bank.

At first Shern was not all that interested in banking, but he was intrigued after the initial interview. “The representative from Hang Seng Bank persuaded me to apply for the management trainee programme in its Operations, Service and Technology Department because it was responsible for problem solving at the company. That was exactly what I wanted.” 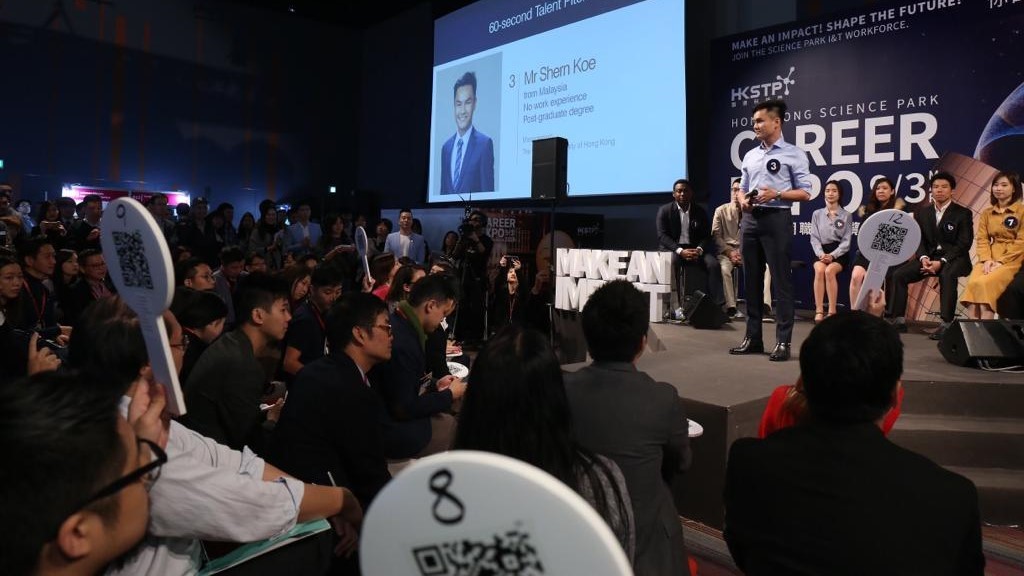 Shern enters an elevator pitch competition at a career fair by chance. His 60-second pitch on stage won him interview invites from eight to nine companies, which eventually landed him the Management Trainee offer from Hang Seng Bank.

Shern and his friend were both invited to an interview at Hang Seng Bank, but he was the one selected while his friend failed because of one key factor: Cantonese. “The human resources interview was conducted in Mandarin, but the interview with the line manager was in English and Cantonese. My friend was Taiwanese and couldn’t speak Cantonese. When I was home, I spoke English with my dad and Mandarin with my mum, but I picked up Cantonese on my own from TV dramas. I should really thank TVB!”

Although it has only been four months since Shern joined Hang Seng Bank, it may well be the stage where he can shine. “I like writing policy briefings and contributing to improving the company. It validates my hard work and gives me a lot of satisfaction. 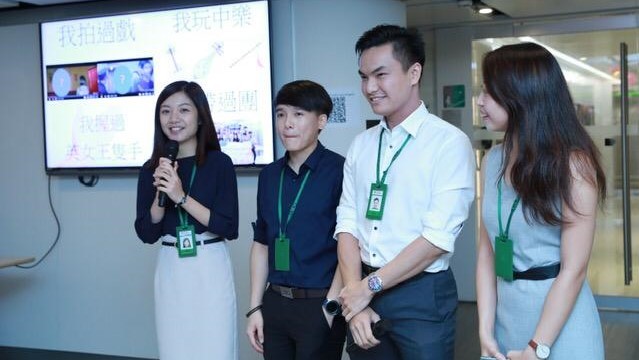 Shern (2nd from right) joins Hang Seng Bank around Mid-Autumn Festival. Along with his fellow Management Trainees, he introduces himself to the company at a Mid-Autumn event.

A year into relocating to Hong Kong, Shern has already adapted to the local way of life. “I like how fast paced Hong Kong is. It works very well for an impatient person like me.” Understanding that the world is ever changing, Shern tends to focus on figuring out which direction he wants to go rather than the fine details when he makes plan. “If you keep walking in the direction you’ve set, you’ll eventually reach your destination.” Perhaps Hong Kong is the perfect place for him to realise his ambitions.